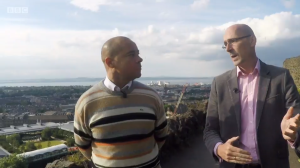 Iain McMenemy is the founder of Figure 11 PR & Communications and is responsible for the operation of the company and client relationships.

Iain has been involved in significant  high level comms activity for his whole working life.  This has  included developing programmes for Government Ministers and past Prime Ministers, delivering democracy into Eastern Europe following the collapse of communism in the early 1990s, and supervising the first free municipal elections in Srebrenica in Bosnia just after the civil war.

A former member of the TA, Iain served in a battlegroup in 2003 during the Iraq War, and now uses this experience as a regular media commentator on defence related issues.  He has appeared on all the major TV news channels and dozens of radio programmes.

Outside of work, Iain is married with three children.  He is a founding Trustee of a community trust charity, Chairman of Stenhousemuir Football Club and a passionate advocate for modernising Scottish football.